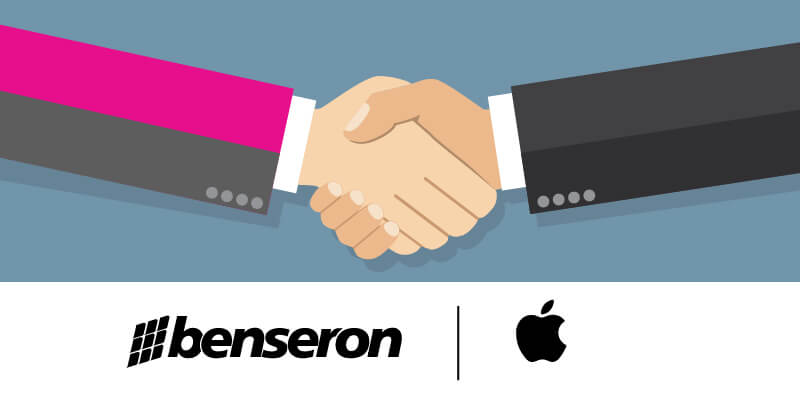 NAPLES, Florida (PRWEB) August 16, 2016 – Benseron, a Florida based technology company that creates enterprise software solutions, recently announced that they have been awarded an ABSP (Authorized Business Solutions Partner) partnership with the multinational technology giant Apple. This partnership, which will provide access to some amazing features and tools, will enable the technology company to distribute Apple iPad products to Benseron’s enterprise customers. With this partnership Benseron will be able to deploy thousands of iPads with Zero Touch Configuration.  Benseron’s new Apple iOS based product Linga POS™, which is due to launch in late August 2016, is a powerful iPad based Point of Sale (POS) Software solution, which is scalable and designed for the enterprise platform within multi-national franchises. Linga POS™ is designed to be accessible from anywhere in the world via the Apple store, which supports the majority currencies of the world and some 30+ languages.

Linga POS™ is built with Apple’s modern, secure and interactive programming language, Swift™ and is the fastest POS system application in the marketplace. With its advanced menu-engineering module, menu programming for any type of restaurant is extremely easy. Adding to that, its big data ready data structure, unlimited data storage and auto scaling architecture, Linga POS™ is going to provide chain restaurants and retail businesses real time sales data, multi store, region, and country management capabilities, making it as easy as managing just one store.

Onur Haytac, the CEO of Benseron said, “The Benseron’s new iPad cloud-based product also solves one very important problem we see consistently in the restaurant environment, the issue regarding the communication of the devices. This new groundbreaking feature will be explained in more detail during the announcement of the launch of Linga POS™.

The highly sought after distinction of the ABSP, is in recognition of the quality of Linga POS™, and there are many things that excite us about this prestigious partnership. First and foremost is the fact that we at Benseron are fans of the unprecedented security of Apple Products, along with its global accessibility for our enterprise customers.”

Apple revolutionized personal technology with the introduction of the Macintosh™ in 1984. Today, Apple leads the world in innovation with iPhone, iPad, Mac, Apple Watch and Apple TV. Apple’s four software platforms — iOS, OS X, watchOS and tvOS, provide seamless experiences across all Apple devices and empower consumers with breakthrough services including the App Store, Apple Music, Apple Pay and iCloud. Apple’s 100,000 employees are dedicated to making the best products on earth, and to leaving the world better than they found it. (Apple Inc)

Quick-Service Trends That will Shape 2022

The Fast Food sector has continued to steadily evolve, as they accommodate their customers during these tumultuous times. From mobile order options to customized convenience, here are the top three trends that will shape quick-service dining in 2022. Sustainable Solutions A survey conducted by Adweek and Harris […]

Twitter is a popular application that has amassed over 186 million users since its inception in 2006. If you want to know the current news and trends around the world, Twitter is where you go. Many businesses, from mom-and-pop shops to major brands such as McDonald’s, utilize Twitter daily to better understand and r […]

In the wake of the covid-19 pandemic, the restaurant industry has had to adjust the ways they interact with their customer base in order to maintain a steady revenue stream. Restaurants, from McDonalds to mom and pop shops, have curated and expanded their loyalty programs to keep their customers coming back, during th […]